This post may contain affiliate links. If you purchase something through one of these links, I will receive a small commission at no additional cost to you. Your trust is important to me and I only recommend products that I have tried and believe in. Read my full disclosure statement here.

As you may have heard, Slim Image Cropper for Gravity Forms is no longer available from the developer. I wrote a review about two replacement options that offer image resizing and image preview. You can read that review on the GravityView blog. This post is all about image croppers available for Gravity Forms.

My review of Slim Image Cropper for Gravity Forms has been my most popular post since the day I published it. In addition, I personally own about half a dozen licenses of it for various sites that I develop. So in addition to wanting to provide a thorough review of the options available, I needed to find a suitable replacement for my own needs!

I have been able to get hands-on experience with each of these plugins. Below I will detail my findings.

Listed in alphabetical order so as not to appear to play favorites. 🙂

This plugin is developed by GravityMore. This developer offers a number of plugins related to Gravity Forms, but this is my first experience working with any of them. Of the three contenders, this plugin has been around the longest, but I suspect it has gained less traction because the developer is not as well known as the others.

I purchased a copy of this plugin to test it out.

This plugin is a Perk available from Gravity Wiz, a certified Gravity Forms developer. GF File Upload Pro is a brand new perk, but builds on the Gravity Perks framework that has been available for years. Gravity Wiz has developed a slew of plugins that enhance Gravity Forms known as Perks. They are known for their top-rate support.

I was able to install this plugin as part of the Pro License I already owned.

This is a new plugin developed by the certified Gravity Forms developer behind Gravity PDF. This plugin was developed specifically as a replacement for Slim Image Cropper for Gravity Forms.

I was given access a pre-production release of this plugin by the developer.

A quick look at the front end of each option.

A look at the back end and features offered by each plugin. 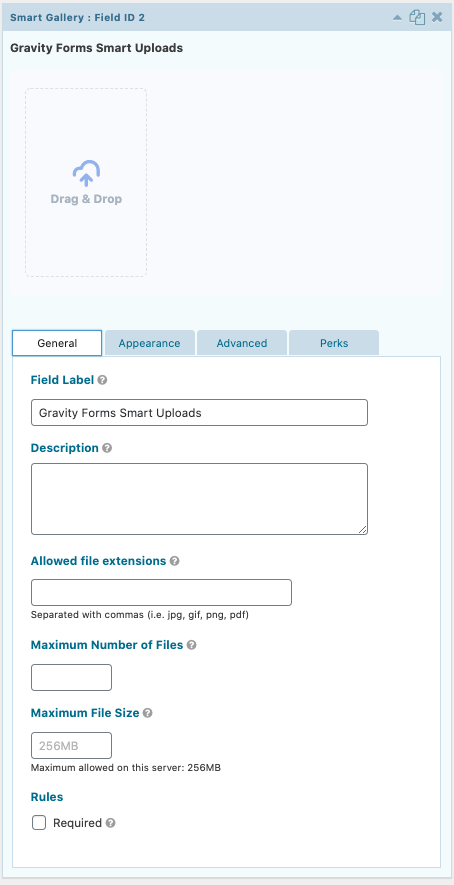 By default the field accepts multiple files, so that option is not included. 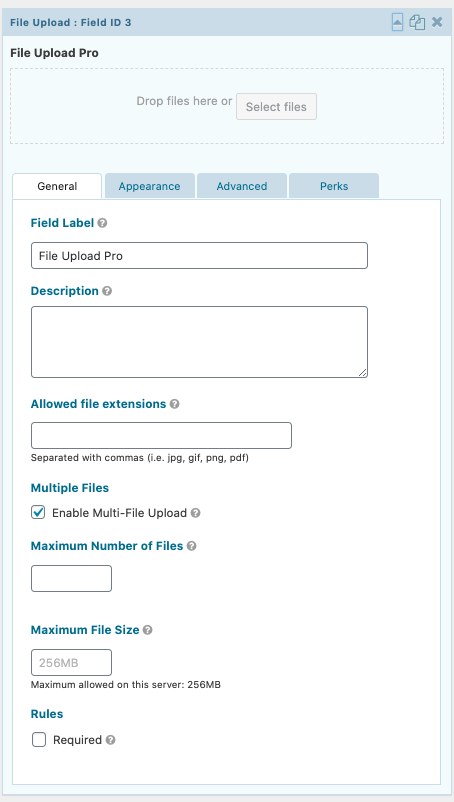 There are two settings tabs for GF File Upload Pro.

The second set of settings are visible on the Perks tab (pictured below). There you can enable the following settings:

Note that GF File Upload Pro works with all types of file uploads, not just images.

Also note, images can be saved to the WordPress Media Library with an additional Perk called GF Media Library. 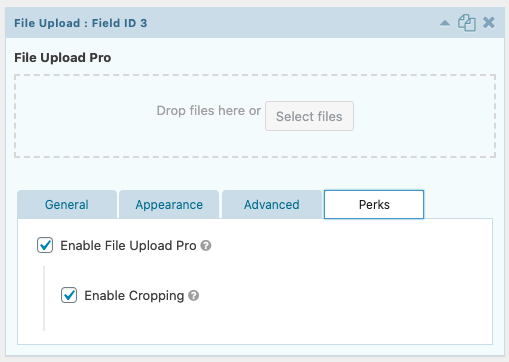 The plugin adds these additional features:

The current version of GF File Upload Pro is Beta 1. Additional features are planned for Beta 2. Among them are setting default image dimensions and setting minimum image sizes, both on the backend.

Sometimes I find the support quality to be more valuable than the plugin itself… a plugin might be great, but if you run into an issue and can’t get a response from support, it doesn’t do you much good. Here’s a quick summary of my experience with support for each of these plugins.

I ran into an issue when testing this plugin and reached out to the developer. The response time and the support were both good.

I’ve been a fan of Gravity Wiz support for years, and this plugin is no exception. I could write a whole post gushing about their support (and maybe someday I will), but for now take my word for it: they are not kidding when they say “Gravity Perks is zealously supported”!

I reached out to support with questions about the plugin before the Ultimate + Editor version was released. I was impressed with their responsiveness and eagerness to help.

Of course this is a subjective answer depending on your needs. 🙂

If you already own a Gravity Perks Advanced or Pro license, then GF File Upload Pro would be a no-brainer starting point.

If you don’t have a Gravity Perks license already, then Gravity Forms Smart Uploads and Gravity Perks come in at the same price point, so it could come down to a feature comparison.

Image Hopper is the most expensive of the bunch, but comes with the features to match the price point. We’ve only really looked at the cropping and rotating capabilites in this review, but there is much more available in this plugin (test it out and get the full details by clicking the link). If you have extensive image editing needs for your Gravity Form, then this is the plugin for you.